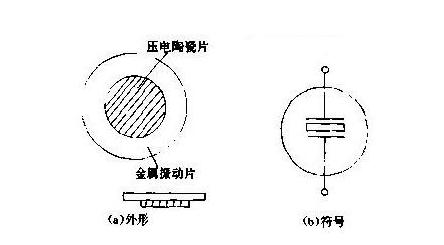 The more common lead germanium titanate piezoelectric ceramic discs (PZT) are made of zirconium, titanium, and lead oxides and then sintered. Since the human ear is most sensitive to sounds with a frequency of about 3kHz, the resonance frequency f0 of the pzt ceramic disc is usually designed to be about 3kHz. Considering that it works at low frequencies, it is difficult to meet the frequency requirements with only a piece of piezoelectric ceramic. Generally, a double diaphragm structure is adopted, and its appearance and symbols are shown in Figure 1. It is a composite of piezo transducer sound discs with a diameter of d and a metal vibrating sheet with a diameter of D. D is generally 15~40mm, and the total thickness of the composite vibrating plate is h.

When the piezoelectric material is constant, the resonance frequency is proportional to h and inversely proportional to (D/2)2. The resonance frequency f0 has an exponential relationship with the diameter D of the composite vibrating plate, as shown in Figure 2(a). Obviously, the larger the D, the better the low-frequency characteristics. When the pzt ceramic disc is used as a microphone, the working frequency is about 300Hz~5kHz. The impedance Z of the piezo ceramic disc depends on the d/D ratio. From Figure 2(b), it can be seen that the impedance decreases as the d/D ratio increases.

There are two driving methods for piezoelectric ceramics. The first is the self-oscillation drive. The circuit principle is to provide positive feedback through a transistor amplifier to form a piezoelectric crystal oscillator, which makes the piezoelectric ceramic sheet work at the resonant frequency f0 to produce sound. At this time, the piezo transducer sound discs have low impedance, and the output volume is controlled by the input current, so it is also called the current drive type.

The second is a separately excited oscillation drive, which uses a square wave (or short wave) oscillator to excite sound. At this time, piezoelectric ceramics generally work at frequencies other than f0, so the impedance is higher and the input current is smaller. It is a voltage-driven type. Its advantage is that the sound range is wider and the tone is better.

Test method of the piezo discs for sale

Under amateur conditions, you can use the voltage file of a multimeter to check the quality of the pzt ceramic disc. The specific method is: dial the multimeter to the 2.5V DC voltage range, gently hold the two sides of the piezo ceramic disc with the thumb and index finger of the left hand, hold two test leads in the right hand, connect the red test pen to the metal sheet, and place the black test pen horizontally on the ceramic surface.  As shown in Figure 3. Then the thumb and index finger of the left hand are pressed firmly, and then they are relaxed. Two voltage multiples with opposite polarities are generated on the piezoelectric disc, making the pointer first swing to the right, then return to the zero position, and swing to the left. The swing amplitude is about 0.1~0.15V. Under the same pressure, the greater the swing, the higher the sensitivity of the piezo transducer sound discs. If the hands of the watch do not move, it means that the piezo discs for sale are leaking or damaged.

Things to care about:

① If the AC voltage is used, no pointer swing will be observed. This is due to the slower changes in the voltage signal generated.

② Before the inspection, first measure the insulation resistance with R×1k or R×10k file. The result should be infinite, otherwise, it proves leakage. After the piezoelectric ceramic discs are cracked by strong vibration, a thin layer of solder can be applied to the crack with an electric soldering iron, and it can generally be used.

④ If constant pressure is applied to the piezoelectric ceramic disc, the pointer will slowly return to zero due to the constant leakage of electric charge.

Using the 50uA file of the multimeter, you can also check the quality of the piezoelectric disc. The circuit is shown in Figure 4. Connect the red test lead to the metal sheet and the black test lead to the piezoelectric ceramic surface. When both hands apply force +F, -F along the axial direction, the hands of the watch should swing a few microamps to the right. When the hand is released again, the hand of the watch swings a few microamps to the left. The installation force and the relaxation time are both dt , the average value of the current through the microammeter is: I = +Q/△t, I2 = -Q/△t.

As mentioned above, there are two modes of piezoelectric ceramics: self-excited oscillation drive and other-excited oscillation drive. The following is a circuit diagram for checking piezoelectric ceramics designed according to the second method. See Figure 3. A piece of CC4069 six inverters is now used, and inverters F1 and F2 form a two-stage inverting resistance-capacitor oscillator, and F3 plays a role of isolation. After connecting the piezo transducer sound discs, a complete buzzer (BZ) circuit is formed. The numbers in the figure indicate the pin numbers of CC4069. Actually selected R1 is 470kΩ adjustable resistance, C=470pF, FR2=1MΩ. Substitute into the formula (f0=0.455/(R1C1)) to find the output square wave frequency f0 is about 2kHz. The power supply voltage VDD is 6~9V.

Application of piezo discs for sale